Hydroponics is the cultivation of plants without soil. The first attempts at hydroponics were documented as early as the 17th century. Sand, quartz or charcoal was used as the culture medium.

The hanging gardens of Babylon can also be described as hydroponic. There, water enriched with oxygen and nutrients was pumped over the growing medium, thus irrigating the plants.

In the orchid world, too, there have been repeated reports about hydroponics in recent years - but this type of cultivation has not really caught on.

The search for a suitable plant material is not new. There have always been well-cultivated orchids in all imaginable plant materials. However, most growing media store more and more water as the cultivation period increases. As a result, the freshly transplanted orchids dry up during weekly watering or the roots of plants that have been in the substrate for a long time rot due to excessive moisture. Due to the high humidity in the pot, organic substrates also turn over quickly (compost) and thus release additional nutrients in an uncontrolled manner.

Regular repotting campaigns can become a burden for larger orchid collections. The search for a mineral plant substance was therefore obvious.

The publication by Ray Barkelow (https://firstrays.com/semi-hydroponic-culture/general-semi-hydroponics-information/) about the semi-hydroculture (SH) of orchids was the reason for me to try this cultivation method as well.

Clear pots without drainage holes should be used as planters. Unlike normal flower pots, the water drain is attached to the side. For this purpose, 2-3 holes are made 1 to 2 cm above the bottom of the pot with a soldering iron.

When watering, the excess water runs out on the side, only the desired water supply remains in the pot. As a result, the orchid no longer needs to be watered for the next 1 to 2 weeks (depending on the weather or season).

I use transparent plastic or packaging cups (500 ml or 1000 ml) as pots. These cups are actually not stable enough, but if they are filled with expanded clay, they serve their purpose and are relatively inexpensive.

For Cattleya or other larger plants I use "normal" pots or bowls, which are then placed in saucers. It should be noted that the saucers should only be slightly larger than the pots. Clay pots and saucers have proven their worth for orchids from the cold house. 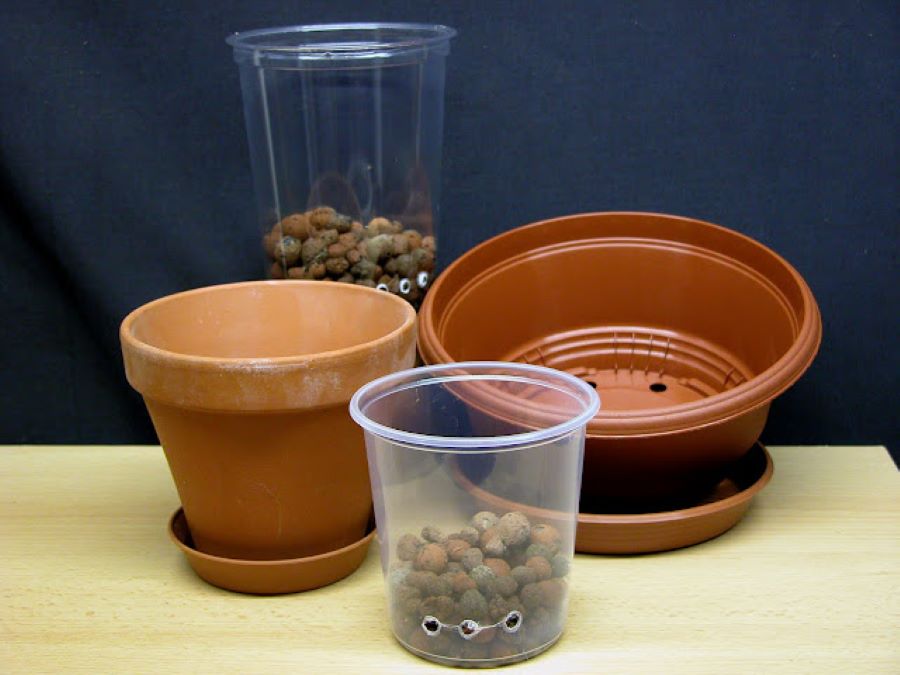 Fill in expanded clay about 2 cm high so that the existing roots do not get into the water (risk of rotting). Later roots are formed that grow directly into the water.

high humidity in the pot - is that the secret of the SH? 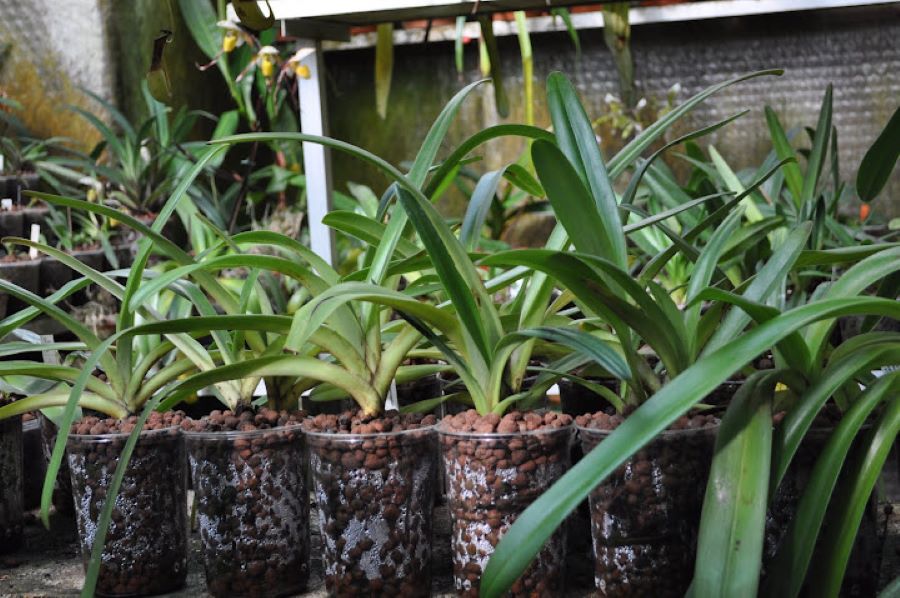 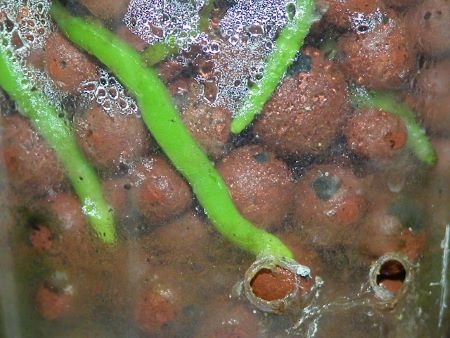 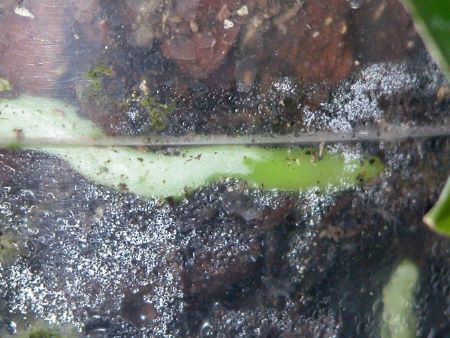 In orchid culture, it has always been pointed out that the constant change between moisture and dryness in the substrate is important. In the SH, the plants have constant moisture available in the pot, be it in the form of high humidity or as a water reservoir. What do orchids need in culture?

If the temperature in the culture room rises due to solar radiation, plants evaporate moisture through their leaves to cool them down. This creates the so-called transpiration suction, which sucks water through the roots and transports it to the leaves. The lower the humidity, the higher the evaporation (transpiration).

If there is insufficient moisture in the soil or in the pot, the plant can survive for a short time without water or moisture. However, if there is no water supply in the next 2-3 days, the plant will dry up.
Of course, this does not apply to bulb orchids, which can easily survive longer periods of drought in their natural habitat.

From this it can be deduced that the constant water supply in the SH can have a positive effect on orchid culture.

new roots of Paphiopedilum in SH 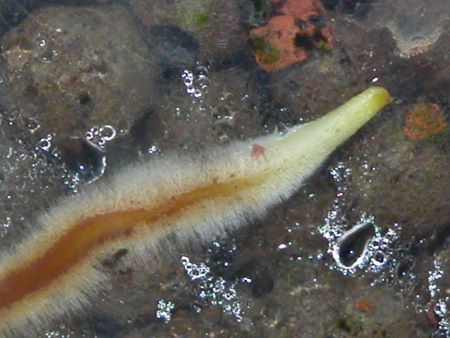 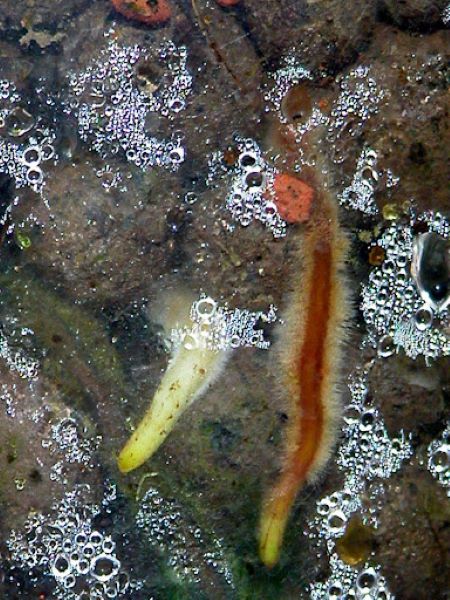 he culture conditions in SH do not differ significantly from those in other plant matter. I only water once a week now. An increase in humidity (RH) is not necessary, not even in summer. When the air flaps are open, the LF drops quickly during the day, but rises again quickly in the evening due to the evaporation of the plants and the expanded clay.

Water: only rainwater is used

Fertilizer: no organic fertilizer may be used, as this would cause rot in the water reservoir.

The salt content of the fertilizer solution fluctuates between 300-600 µS depending on the weather or the season (see note at the end of the article).

The plants are watered until the water runs out of the side holes. When watering regularly with rainwater, the pots should be rinsed properly so that salt residues are also washed out.
For windowsill culture, the pots should be completely submerged in rainwater for several minutes.

During the winter dormant period, it is only watered every two weeks.

Weak-rooted plants are wrapped with a thin layer of sphagnum at the root base, giving them a better hold in the expanded clay. As a result, new shoots occasionally grow on the old bulbs after a short time. The moss should be removed later.

A complete covering of the pots with sphagnum or other materials has not proven itself in my cultures. Old substrate residues must of course be removed when repotting in SH.

Root formation of Stonelaelia in SH 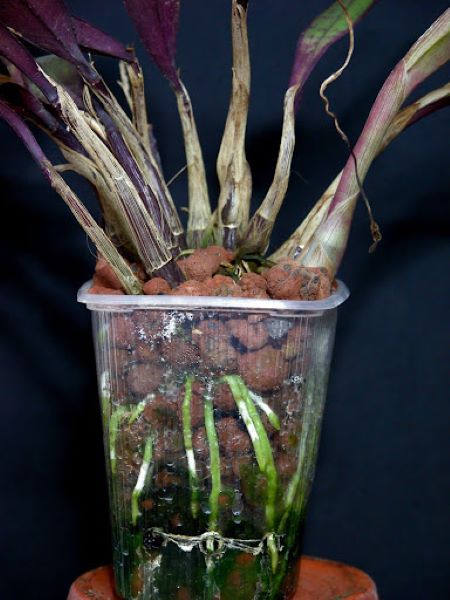 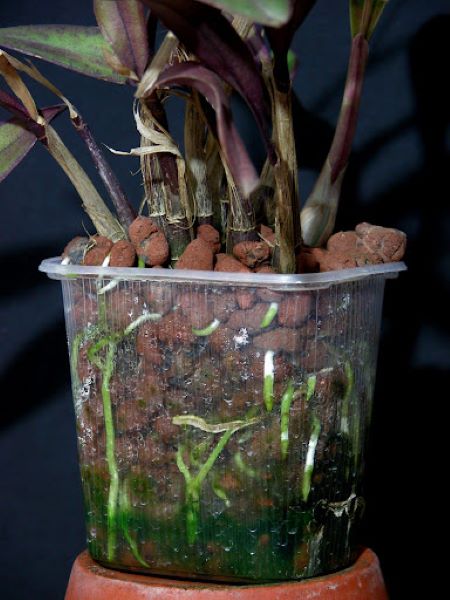 Some orchids need several months to adapt to the culture form SH. During this transition phase, the orchids should be watered every few days, especially on the windowsill. Later, new roots also grow into the water reservoir. Due to the constantly moist environment in the pot, fewer roots are formed than in conventional culture.

Orchids with a pronounced rest period are watered less, as before. Before this “rest period”, the pot should be rinsed with clean rainwater so that there are as few salt residues as possible.
Over time, the bottom of the pots will grow a little algae, but this does not harm the culture. A pot can help here.

After a culture period of two to three years, the roots in SH stopped growing. In addition, a larger layer of algae had spread in some pots. The plants were potted and the conductivity of the expanded clay was measured. The result was surprising - the conductance was over 2000 µS!!!

The expanded clay was washed several times in rainwater and could be reused as plant material.

The water used today has a maximum conductance of 150 µS.

We use cookies on our website. Some of them are essential for the operation of the site, while others help us to improve this site and the user experience (tracking cookies). You can decide for yourself whether you want to allow cookies or not. Please note that if you reject them, you may not be able to use all the functionalities of the site.